Recent News in the Vaping Industry

Consumers are likely aware of the recent reports of respiratory illnesses — including some resulting in deaths – following the use of vaping products. The U.S. Food and Drug Administration (FDA) remains deeply concerned about these incidents and is working closely with the U.S. Centers for Disease Control and Prevention (CDC), as well as state and local public health partners to investigate them as quickly as possible.

“Instead of simply acknowledging that a large number of cases in the recent outbreak of severe, acute respiratory failure are due to black market THC vape carts, the Centers for Disease Control and Prevention (CDC) is undermining that key information and continuing to do everything it can to pin the outbreak on the use of traditional, nicotine-containing electronic cigarettes.” – Michael Siegel, Professor in the Department of Community Health Sciences, Boston University School of Public Health1

The Facts on “Vapor-Related” Lung Illnesses

In April of 2019, FDA released a special announcement that both new and experienced e-cigarette users were experiencing seizures. As of late, CDC has stated that they are investigating over 450 cases of “vaping related” lung illnesses in the United States, of which, 215 have been confirmed. 6 total cases have resulted in death in California, Minnesota, Illinois, Indiana, Kansas and Oregon. The cases in California, Minnesota and Oregon report THC use, while the other half disclosed no additional details.2

Dr. Daniel Fox, a pulmonologist with WakeMed Health Pulmonary & Critical Care Medicine, stated in the telebrifing with CDC on Sept 6th that “During the work-up and the history, all the patients that we saw had used or consumed THC through their vaped, vaping devices through the e-cigarette.  And that seemed to be a common feature.”3Of the 8 patients that were treated for lung-illness in New Mexico, all reported that they were vaping THC oil.4In Minnesota, 17 patients have been classified as confirmed or probable cases of lung illness and an additional 15 potential cases are under investigation. “Of those cases who have been interviewed, all reported vaping illicit THC products.”5

How Have FDA and CDC Responded?

Following their telebriefing, CDC released a warning urging people to stop their use of e-cigarettes altogether.6 They failed to mention the fact that public health professionals are turning their heads towards specific THC products, a common denominator in many of the lung-illness cases.

The same day CDC released their statement, FDA posted their own announcement, which goes into far more detail. Rather than warning against all vapor products, FDA urges the public to avoid buying vapor products from illegitimate sources, and specifically tells people to refrain from using THC oils and modifying/adding substances to products purchased in stores. They specifically state that “most of those samples with THC tested also contained significant amounts of Vitamin E acetate. Vitamin E acetate is a substance present in topical consumer products or dietary supplements, but data are limited about its effects after inhalation. While the FDA does not have enough data presently to conclude that Vitamin E acetate is the cause of the lung injury in these cases, the agency believes it is prudent to avoid inhaling this substance.”7

What Have Studies Revealed?

The New York Department of Health released their own update on these cases on September 5th. “At least one vitamin E acetate containing vape product has been linked to each patient who submitted a product for testing. Vitamin E acetate is not an approved additive for New York State Medical Marijuana Program-authorized vape products and was not seen in the nicotine-based products that were tested.”8 The New England Journal of Medicine published a study on September 6th that delved deeper into 53 pulmonary illness cases in Illinois and Wisconsin. Of those patients, 41 were extensively interviewed, and 80% reported using THC products. Furthermore 24 patients reported using the same illicit THC oil marketed under the “Dank Vape” label.9

How Can the Public Protect Themselves?

It is best to avoid buying nicotine and THC based vapor products from illegitimate sources. Since CDC’s statement, many states are initiating their own public warnings against all vaping, while fewer are warning against illicit THC products specifically. This has caused widespread panic in ex-cigarette/current e-cigarette users who are under the impression that their conventional cigarette use is safer than vapor product use, initiating a switch back.

Just to be clear, there has been no concrete link between legitimate nicotine-based vapor products and these lung illnesses, and keep in mind that correlation does not equal causation. As investigations continue, the percentage of patients that report using only nicotine products is getting smaller, as more are admitting to THC-oil use. 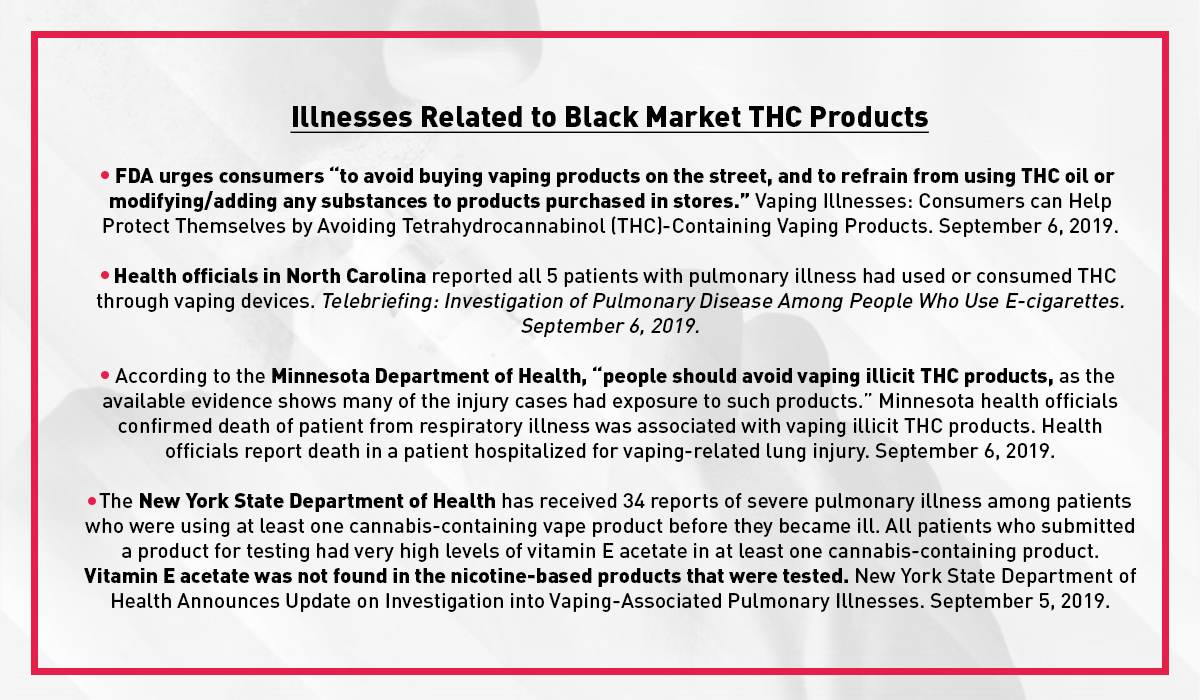 On Wednesday, September 11, 2019, Donald Trump, along with HHS secretary Alex Azaar, announced that the administration would be banning all flavored vapor products from the market. In spite of an incredible 28% decline in youth smoking–according to early data from the National Youth Tobacco Survey (NYTS)–the administration is citing a 25% increase in vaping among young people as justification for taking such an extreme action.

The White House needs to hear from adult vapers and anyone who loves a vaper! A flavor ban won’t protect our children, but it will kill their parents.

WRITE, CALL OR EMAIL THE PRESIDENT, HERE’S HOW

NATIONAL CALL TO ACTION – LIGHT UP THE WHITE HOUSE SWITCHBOARD

How many years did you smoke before quitting? What flavor helped you to quit? Share your story with us on Instagram or Twitter @madvapes ! Tons of people have quit smoking thanks to vaping and studies show that you have a higher likelihood of quitting if you use flavors. We produce and sell high-quality eLiquids that are safe for consumption. The problem is NOT flavored eLiquid!#WeVapeWeVote 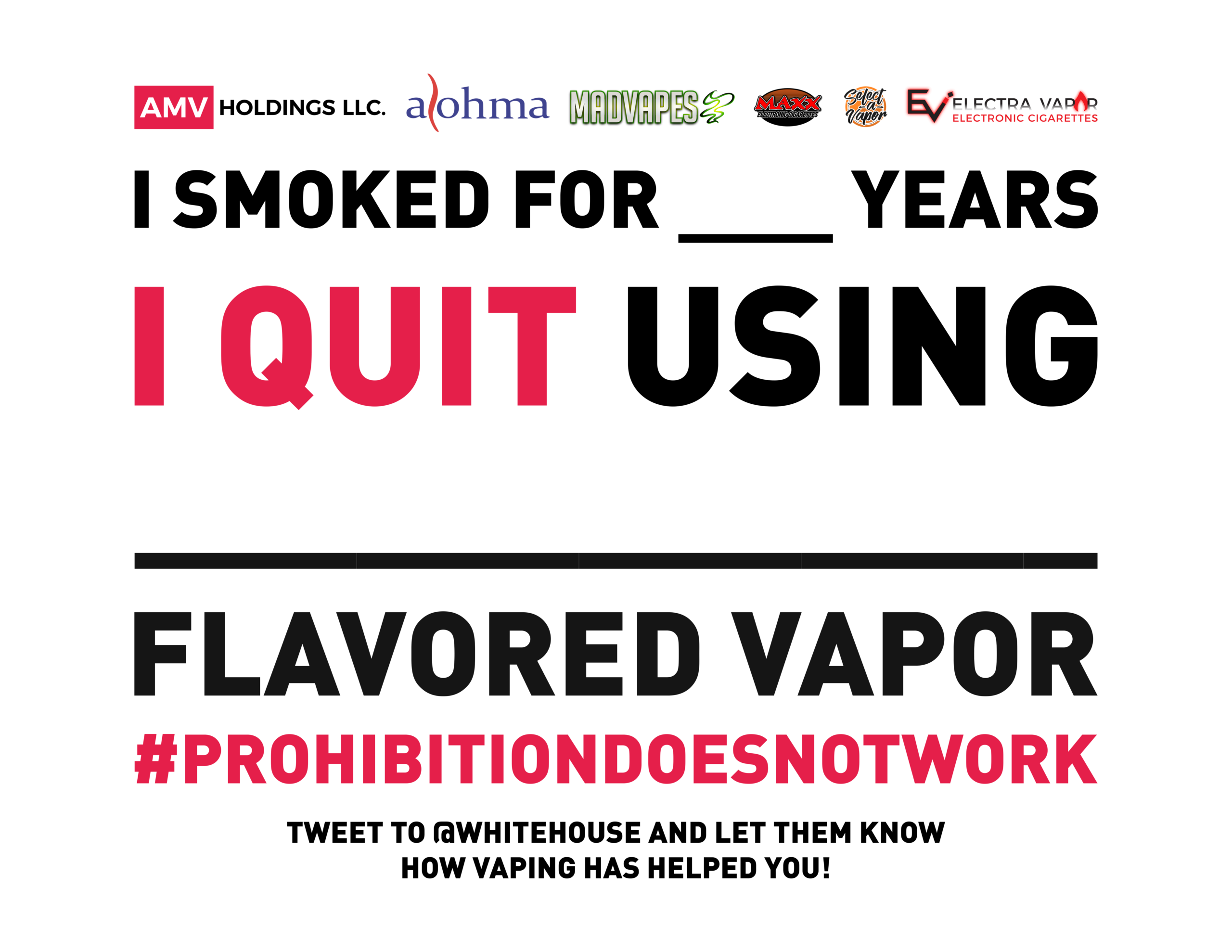 Signup for our news letter!